All articles tagged with "Humiliation"

Princess Kitty went to make a significant purchase and it dented her bank balance. The mistress did not want to let it stay that way so she had to replenish it. But she did not want to use her own money so she took advantage of her findom fetish and she financially humiliated her slaves and she got them to do what she wanted which was to give her money. 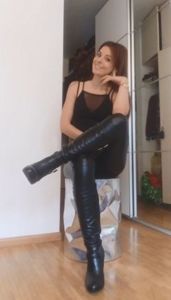 Madame Svea loves to make money. There is nothing else she likes more than humiliating her paypigs. She does this to make money for herself and she teases them so that they can think they are getting value for their money. But in the real sense, she is using them. Today she did the same. She enjoyed teasing them and she played with her tits and made naughty faces at them and she got what she wanted as she was able to control them.

Princess Deborah did not like how her husband burned his money. He spent it on all kinds of things and he rarely saved any. He did not even use it with her or on her and she did not like it. So she set him up and she both cuckolded him and she financially dominated him. The mistress could do nothing about it and she had fun at his expense.

Princess Serena loves to make money while having fun. She does not like having an office job because it is too stressful for little money. She prefers to use her findom humiliation fetish to make money. She likes to lure guys and turn them from losers into her pay slaves. She knows that they cannot score hotties like her and she uses that fact to her advantage to make them her pay bitches.

Goddess Chanel drives a fancy car. But she was broke. And that was not right. She had to get some money because someone like her was not supposed to be without money. She chose to use her pay slaves to get the money she needed. She stopped by the home of one of them and she humiliated him financially. She then went to the car to count her money before driving off.

This mistress was bored and she resorted to have fun at the expense of her pay slave. She teased him as she smoked but her goal was to kill time as well as to make money off of him. She enjoyed making him do naughty things as she smoked and finally she got him to pay for her time. That was the best part for her as she got paid to kill time.

Lady Amy was broke and she had to get herself some money. She did not want to borrow it because it meant she would have to pay it back. She chose to dominate her pay slave. She found an excuse to dominate him financially and she had a great time doing it. She even threatened him because she was not in the mood to tease him and she got what she wanted.

Princess Serena has a great ass. She knows that she has a gorgeous ass and since she was broke today, she used it to make a little money. She turned this admirer into a paypig by teasing him and getting him to be her human credit card. He gave her money and did not even realize he was doing it. She controlled him and mind fucked him to the point he did all she instructed without question.